Q: I am a bit confused about Loading Time, Shift time, Potential production time.  How do they relate? Or are they all the same? 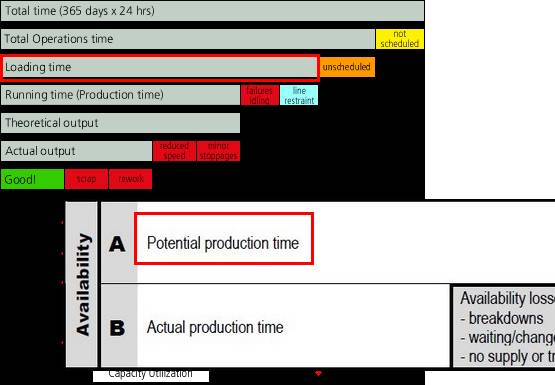 Arno Koch • ‘Potential Production Time‘ is the ‘general container’ that is to be determined.
Normally, potentially, the machine could run the whole shift.
And OEE -being a shopfloor tool- it is normally calculated per shift. Later, shifts can be aggregated.
So potentially, within OEE the shift-duration is the 100% limit for the availability.

Now in some specific situations, it can be decided to un-schedule a machine, e.g. in cases where there is no demand.
In such cases, the shift-time is reduced by the un-scheduled time.

‘Loading time’ is normally defined as the time the machine is supposed to be scheduled; so normally it equals the ‘shift time’, sometimes reduced by the un-scheduled time.

Unfortunately, many people ‘play’ with ‘planned and unplanned’ time.
So they say: Pause is planned downtime, thus we unscheduled the machine.

If we follow that path, maintenance, setups, and many other events are planned and would not be included in the OEE.

Of course in that way, OEE loses its value. Why try to measure it if you exclude all kind of losses…

Now an interesting question rises when we consider the OEE value during a shift. What now is the duration against which the OEE is being calculated?

1. Why is it called 'Availability'?
2. What are the categories of time within the availability of OEE?
3. How many different 'Failures' should we define?
4. What is: 'Loading Time' - 'Shift time' - 'Potential Production Time'?
5. How to calculate Availability (and OEE) when a shift is not completed yet?
6. Should 'Breaks' be in- or excluded in the OEE?
7. Should 'Preventive Maintenance' be in- or excluded in the OEE?
8. Should 'Cleaning' and 'Maintenance' go into the OEE?
9. What to register when we start 'Cleaning' while we 'Wait for Technician'?
10. How do we treat a coil change at a slitting machine?
11. how to calculate availability of parallel processes?
Academy Home
OEE Calculation
Availability
Effectiveness KPI
Performance
Implementation
Quality
Improvement