2. What is the difference between OEE – OOE – TEEP?

Q: What is the difference between the OEE, OOE and TEEP measurements?

Overall Equipment Effectiveness measures a machine’s availability, performance and quality in order to visually display all the losses that occur on this machine. So how do OOE and TEEP measurements differ from this?

Arno Koch •  The three measures are all visualising effectiveness losses.

The only difference between OEE, OOE and TEEP is the ‘maximum time’ that is used in each calculation.

In other words, the only changing variable between these three calculations is the maximum time that is available for a machine to run. They all take availability, performance and quality into account.

Total Effective Equipment Performance Considers maximum time to be All Available Time – that is 24 hours, 365 days a year.

Overall Equipment Effectiveness looks at the Potential Production time as a maximum, without calculating time that has been unscheduled. 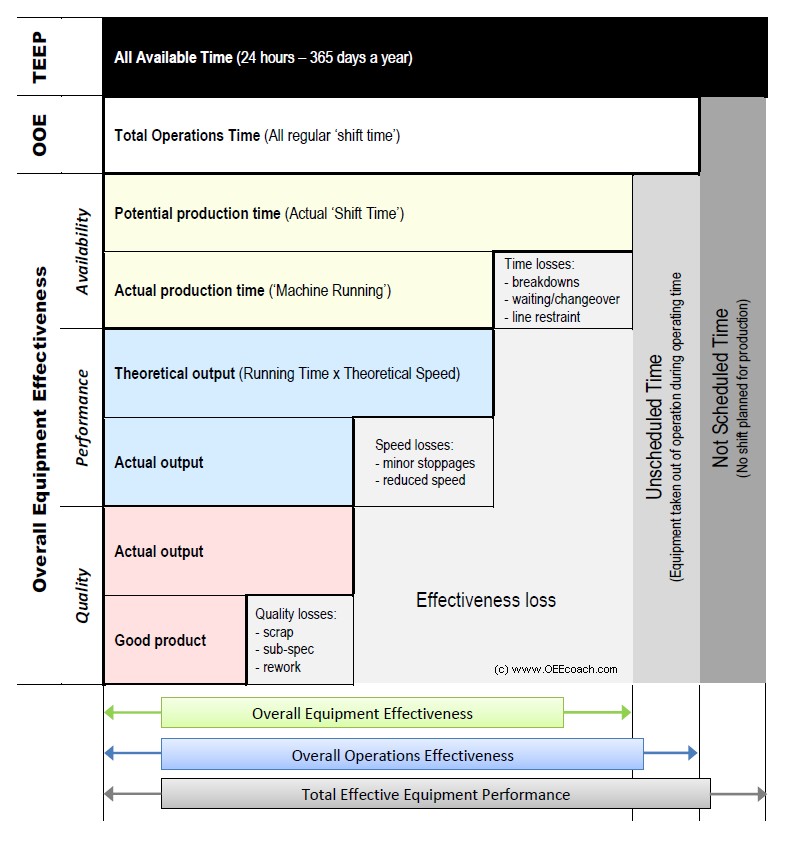 Introduction: what is behind those KPI’s ?

In the ideal world, manufacturing equipment would be adding value all the time, at theoretical maximum speed, in precisely the desired quality.
So, if we want to know why our equipment is not ideal, there are 4 questions to be answered:

Running or not: Availability

Availability rate: The percentage of time the machine was available, was able to produce output.

Whenever the machine is running, thus really produces output, we determine how much, or how fast, the output was produced.

The ratio between the theoretical quantity of output while running, versus what actually came out, is the Performance rate.

From everything that came out, it is determined whether it was meeting the quality as expected. Was the output within the specification?

The ratio between the total actually produced output and the good output is called the Quality rate.

There are several KPI’s possible around those three rates. The main difference is the time-frame that is been considered while looking at availability.

In the end they all those KPI’s want to know: How much good product came out versus how much could it have been produced? And here is the crux: it all depends on what time frame is considered.
If we look at a years’ production; is this now based on 365 days of 24 hrs? Or is it only the time of all the shifts we would have scheduled? Or only the actually scheduled shifts? Or do we only consider the time we planned the machine to run within the scheduled shifts?

Let’s break it down to the core.

If we want to know the real utilization, the real effectiveness of our equipment, we look at the amount of good product produced versus what could have been produced if there would have been no restraint at all.

This is what TEEP does. It takes 24hrs of 365 days a year as potential production time.
A well defined TEEP (and this also applies to OOE and OEE) takes the theoretical output as a maximum for performance and OTIF (so within specification AND on time) as a quality limit.

TEEP calculates availability as a ratio between the TOTAL calendar-time during the measurement versus the time the machine was actually having output in that period.

So in a 1-shift operation of 40 Hrs during an 168 week, the availability can be theoretically no more than 40/168= 23% (assuming OEE=100%). TEEP now shows clearly that the equipment is sleeping at least 77% of its life time due to the fact it is not scheduled to produce. In this example TEEP = Loading Rate.

So one could also say:

For those working in the daily operation, TEEP uses a time-frame that is ‘too wide’. The operations management is interested in the effectiveness of the equipment during operations time. So the first filter to apply is to take out all the time that the equipment was not scheduled anyway.
In other words:

OOE uses all regular shift time as the time-frame.

This is the KPI for the shopfloor-team.

OEE relates the actual good output versus the ultimate potential good-output while the machine was scheduled to run. (So during the actually scheduled shift time).

What if we have a line that runs one shift (8 hrs) and there is a production plan is for that time; what happens with the other two shifts? In theory the line is available to run 3 shifts, but its been used for just one shift.

Proper OEE Software visualizes ALL effectiveness LOSSES on your machine, since that is the area where you will find your improvement potential. Even when losses are excluded from the OEE definition; they should become visible in the analysis!

1. What is the difference between EFFICIENCY, EFFECTIVENESS and PRODUCTIVITY?
2. What is the difference between OEE - OOE - TEEP?
3. Is it 'Overall Equipment Efficiency' or 'Overall Equipment Effectiveness'?
4. What is Asset Utilization and Capacity Utilization?
5. What is 'Loading Rate'?
6. How does 'Planned' versus 'Unplanned' time affects OEE?
7. Why are there several (OEE) Effectiveness KPIs?
8. (How) does OEE fit with Six Sigma?
9. How do I best measure the performance of our machines?
10. Measuring effectiveness of machines that are not always scheduled
11. How much productivity improvement is possible?
Academy Home
OEE Calculation
Availability
Effectiveness KPI
Performance
Implementation
Quality
Improvement